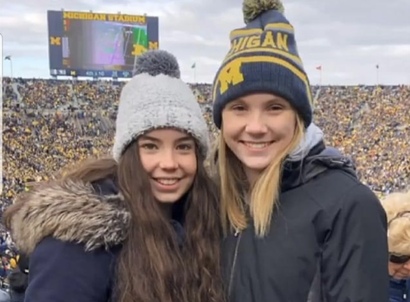 It’s hard to believe that Katie Schlagel is only 18 years old. International youth exchange has made her particularly wise about the world out there. “Open your home to someone from another country,” she recommends. “And be willing to understand that they’re not going to act like you. They didn’t grow up like you.” 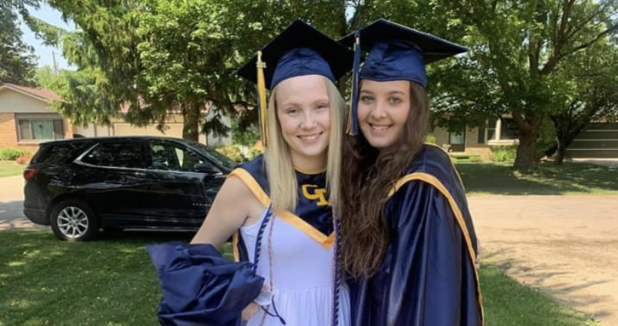 Katie (left) loves all four of her international sisters. Lucia from Spain seemed shy and introverted at first, then surprised the whole family by coming out of her shell with an outrageously fun sense of humor that kept them laughing all year.

Katie was just 15 years old when her life suddenly went international. Her school offered a chance to host an international student for just one month. That’s when Johanna from Germany landed in her life. “It was a little awkward at first. I had talked to her via text, but you could tell she didn’t really understand everything.”

In no time, the two girls became fast friends. “We got along from the start because we have a lot of the same interests - like shopping," she says with a smile. It was a whirlwind month, but the girls managed to fit in a 5-hour shopping trip at an outlet mall in addition to a Homecoming game, two bonfires – and a visit to the local pumpkin patch so they could carve pumpkins. “She loved that,” Katie recalls. “She didn’t do that in Germany." 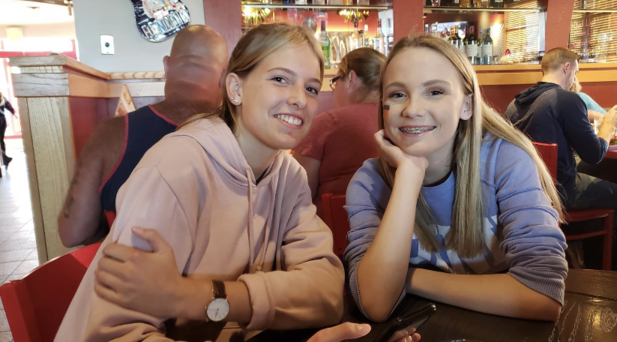 Johanna from Germany (left) was international sister number one. In just one short month, the two girls formed a strong bond that would keep growing with Katie's visit to Germany.

“I think everyone should try (hosting an exchange student) at least once,” says Katie. “You live 80 years. It’s one year out of your life. You get to give someone many experiences they could never imagine happening.” And you also get a lot in return, especially if you are a teenager right on the brink of choosing your path in life.

Today, 18-year-old Katie is heading for college. What's she planning to major in? You guessed it: German! Did her experience hosting Johanna influence her decision? “Definitely yes!” she insists. “I love German culture.” And it was that first exchange that took her to Germany for a tour of the country and a homestay with Johanna and her family.

But Germany, German and German culture are a just few pieces of this teenager’s international puzzle. “It was such a great experience I convinced my parents to host another student for a semester,” Katie recalls. Today, four international students later, she is closely connected to both Germany and Spain, with two international sisters from each country.

Katie said good-bye to Johanna in October 2018 and then welcomed  Lisa – also from Germany – in January, 2019. “Her English was level five, so it was easy to communicate with her.” Katie was thrilled to be able to keep diving deeper into German history and culture. “We went to Chicago to the WWII museum. It was very enlightening to hear her thoughts compared to my history classes.”

The Aerospace Museum in Washington D.C. was just one of many sights Katie took Lisa from Germany to see. They also visited the WWII Museum in Chicago where Lisa was able to share her views on Germany's role in the conflict.

One thing Katie noticed is that Lisa – like other German students she met – had no problem discussing German history related to World War II. “They’re very honest about their mistakes. They talk about it. You can tell there is shame in their history. They’re very open about it, unlike in the US where I feel we aren’t ready to recognize our mistakes from history.” 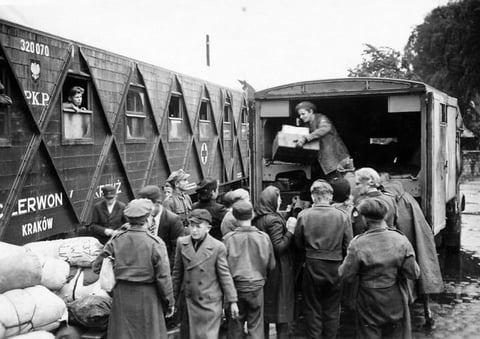 Katie has enjoyed learning about World War II from Lisa and other German students who have been open to discussing a very difficult period in their history.

And Lisa fit right into the family. “She got along well with pretty much everybody,” Katie remembers with a heavy dose of nostalgia. “Lisa is very similar to my brother. They’re both homebodies who like staying home watching movies. I like going out. By the end of the stay, she started going out more to eat and shop. We got closer.” 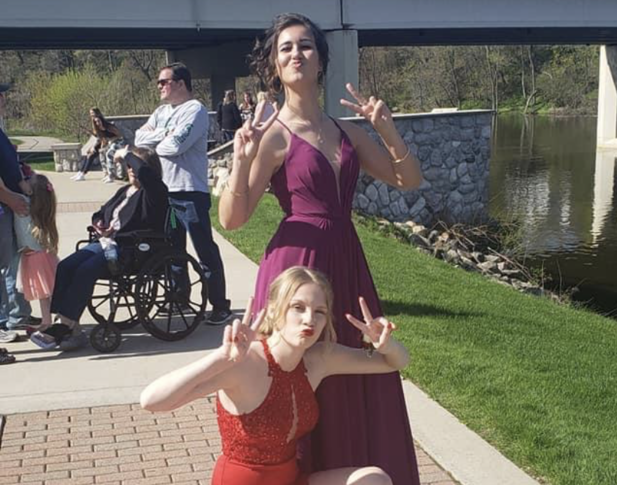 Lisa fit right into the family, enjoying everything from dad's sense of humor to watching movies with her new brother and getting ready for prom with Katie.

“She and my dad got along really well too. He called her ‘The German’,” Katie laughs. “My dad is very sarcastic. Even though her English was really good, Lisa didn’t understand sarcasm when she arrived.” That simply made for much family fun as Lisa quickly caught on and soon delighted in dad’s jokes. “They had a similar sense of humor.”

“We loved Lisa and we were really sad when she left.” It was especially hard for Katie to say good-bye because she had to leave for Germany – for her own exchange with sister number one (Johanna) – a few days before sister number two was scheduled to fly home. “I was bawling at the airport because I wouldn’t see Lisa again.”

Thanks to Katie’s school, she was part of a whole group of high school exchange students. “We did a week and a half tour of every major city in Germany. Then we went to the homestay. I actually got to go to school with Johanna like she did when she was here. I thought I knew German, but I didn’t understand a thing.”

When it was Katie's turn to go to Germany she toured the county and then stayed with Johanna and her family (above), attending school and practicing German.

“That’s when I decided that I was very, very interested in Germany. It gave me a new outlook on the world.” It wasn’t the first time she had travelled, but it was the first time she had to struggle to adapt to another culture – and express herself in a second language. “I was exhausted at the end of the day just not getting to hear my own native language and needing to think all day.” 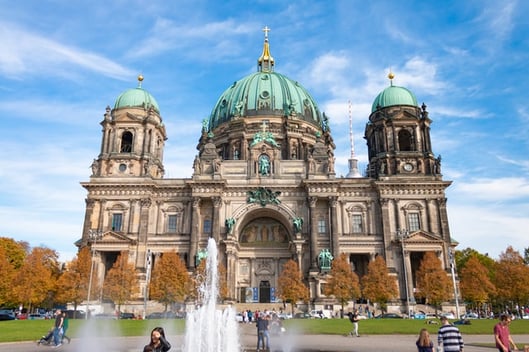 Katie's exchange in Germany included a whirlwind tour of major cities including Berlin, and a homestay with Johanna, her first international exchange sister.

“One day I was in the pool with three German girls. They were talking so fast, and I felt really left out. That gave me a new understanding about what that feels like. They probably didn’t even realize they were doing it and I probably did it when Johanna was here with me.”

How many teens have the chance to make connections like this? And it was just one of so many "aha moments" that Katie would experience.

And she’ll never forget her top culture shocks… “I loved the food. I like meat and potatoes, but their portions were very, very small. I looked at how much they were taking and tried to take similar amounts. I wondered how they survive on this.” She was even more surprised when alcohol was served at the graduation ball - organized by the school! "And it went till 5:00 a.m., which I also thought was weird," she recalls.

After Germany, Katie was all set to host another sister from Germany. But sadly, her chosen host sister couldn’t make it. So, what to do? “The coordinator found Cristina (from Spain) and thought she’d be a good fit. She was on the plane like two days later.

“Cristina and I did a lot of stuff together we had a lot of the same interests. There’s a coffee shop near my house where we went every single Sunday the whole year. We would just sit and have coffee and talk.” 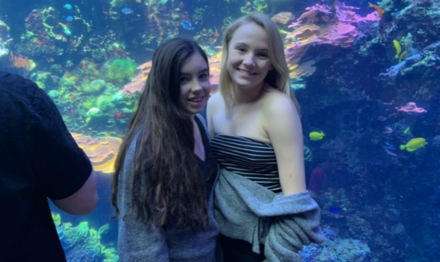 Katie and Cristina were together day and night, sharing a room, taking the same classes and even visiting Atlanta to see the  aquarium and the World of Coca Cola among other attractions.

Bonding during the Pandemic

“Cristina was way more energetic than any of us. She was always positive, even during Covid. When we were down, she had so many ideas: ‘Let’s go to the art store! Let’s drive through McDonald’s at midnight!’ ” 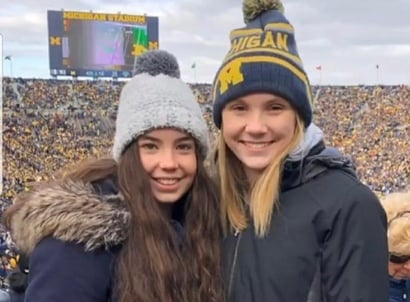 Cristina from Spain was game for everything - including a real, live American football game. Katie and her family enjoyed sharing their passion for the University of Michigan team with her.

“She always saw the light in things. She was supportive and understanding when I was going through a hard time. She was always positive and seemed to understand. She was generous and thoughtful. On my birthday, she brought me a handwritten card to every single class and to my car. And she threw me a surprise party too! I never expected that.”

And finally it was time for Katie to choose one more international sibling before heading off to college. She chose to host another student from Spain. Her name was Lucia. The two girls would be the same age. They would even graduate together. Katie's expectations were running high.

Lucia was not what the family expected – at first. “Her profile said she loved to sing and dance and go out,” Lucia recalls. “Then she arrived and was very quiet and shy. She didn’t talk. It was a little hard at first. I wanted to do things with her, but it was hard to find things to talk about. I honestly think she didn’t understand us.” 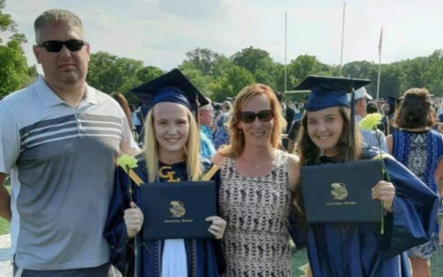 International sister number four, Lucia, took time to warm up, but it was well worth the wait. The entire family fell in love with her.

Did Katie and her family ever consider giving up on Lucia, maybe looking for a different family for her? Absolutely not! “We thought she would get there. She just needed time.”

Precisely. After just a few weeks… “She was out of her shell. She was putting on shows and singing and dancing for us. She would get lyrics from YouTube and use a water bottle for a microphone. She was really funny!” It was the start of another super exchange learning about Spanish culture for one more entire academic year.

From Germany to Spain…

Everything revolved around Germany at first. Johanna, Lisa, and a trip to Germany sparked Katie's interest in all things German. But thanks to Cristina and Lucia, she’s also thinking about Spain. “Now I have a unique view of Spain,” she muses. “I don’t even know what to expect when I go there.” She’s heard about Spanish-style parties and staying out all night. “It sounds so crazy but maybe that’s because I live in the mid-west where nothing happens. I’m very excited and curious to go and see what it’s like there.” 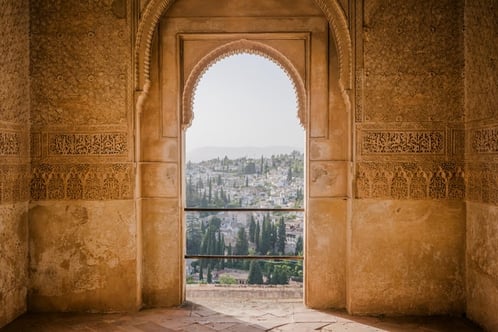 Katie is looking forward to visiting Spain. Her experience with international exchange has taught her to let go of expectations and embrace the adventure of exploring the unknown.

She’s only 18 years old, but Katie already knows the key to successfully crossing cultures: expectations. “Don’t hold people (from other countries) to an expectation. I feel Americans meet one person from another country and then think that everyone from that country is like that.”

Being Transformed through International Exchange

Katie is one teen who has been truly transformed by living with international siblings, year after year. They’ve swapped stories over Sunday coffees, shopped till they dropped, compared notes on everything from different foods to different school systems – and different ways to live, learn and have fun. 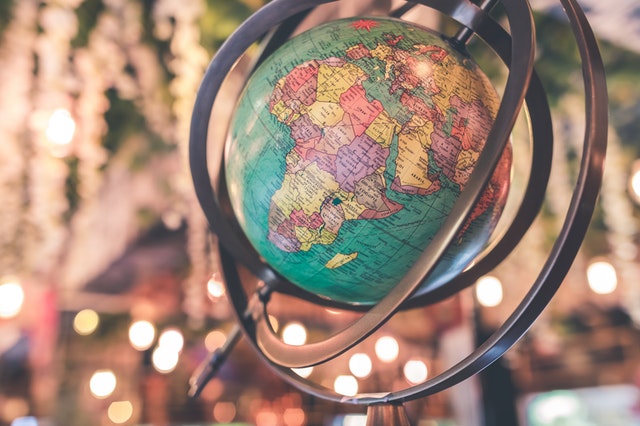 The bottom line? As Katie's world view has expanded, she has gone from a locally-minded teenager to a globally-minded young woman.

And she heartily recommends everyone give this experience a try - at least once in a lifetime!

What's It Really Like to Live With a Host Family?